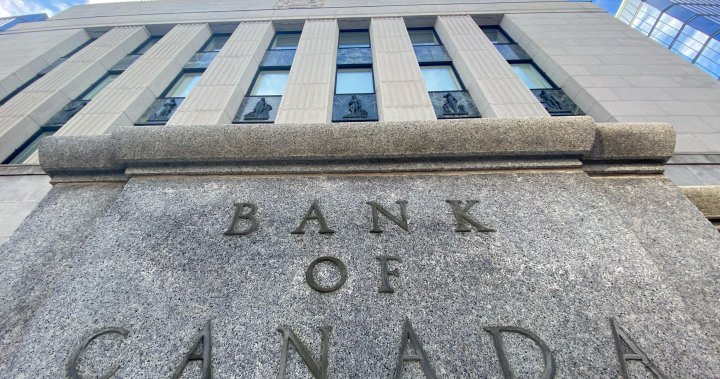 Not all Canadians feel the pain of rising interest rates. Here’s why that might change – National

One of Canada’s leading banks argues that while most Canadians are largely insulated from the impact of rising interest rates today, efforts to bring inflation down to manageable levels could leave some debt and mortgage holders feeling the pain for years to come.

The Bank of Canada is expected to raise its benchmark interest rate again on Wednesday, marking the fifth time it has raised the cost of borrowing so far this year in a bid to cool the economy and reduce runaway levels of inflation.

CIBC Deputy Chief Economist Benjamin Tal argues that thanks to the structure of Canadian household debt, the direct impact of rising interest rates is currently limited to about one in four debt holders, primarily focused on homeowners with certain types of mortgages.

“When people hear about higher interest rates, they assume everyone will pay more. And that’s not the case because of the structure of debt in our economy,” says Tal.

CIBC’s Tal and Karyne Charbonneau broke down the impact of rising interest rates on Canadian household debt in an Aug. 22 report using data from Statistics Canada.

The authors note in the report that 30% of Canadians have no debt, which means that a higher borrowing rate will not affect their payments in any way.

Many people with debt do not have a mortgage, which means that their household debt comes from credit cards or loans to finance a new car, for example.

So that leaves only mortgage holders — and homeowners who take out a home equity line of credit (HELOC) on their properties — to feel the brunt of rate hikes.

Those with adjustable rates are certainly feeling the effect of higher rates, as the amount they are paying on their mortgage increases immediately when the Bank of Canada raises its key rate. This is also the case for interest rates on HELOCs.

But 70% of Canadians with adjustable rate mortgages have fixed payment schedules, meaning they don’t pay more each month when their rate goes up. Instead, the amortization, or the total length of their mortgage term, extends.

Tal says that since five-year fixed-rate mortgages are “dominant” in Canada, most monthly payments are holding up in this rising interest rate environment. Fixed-rate homeowners will only feel the sting of higher rates when they renew their mortgage in a few years, he says.

This means that for this year, only one-fifth of fixed rate mortgage holders are exposed to falling interest rates, as well as adjustable rate and HELOC holders.

“Putting all of this together, we get that of the total household debt of $2.7 trillion, nearly $650 billion (24%) faces a real increase in interest payments this year,” the report says. report.

Tal tells Global News he doesn’t expect rates to continue to rise after September, but that doesn’t mean other mortgage holders are off the hook.

On the contrary, each year could see a wave of success with Canadian holders of fixed rate mortgages renewing themselves in this new environment of higher rates.

“The impact is not really significant today, but cumulatively it will be,” he says.

Those who are “on the fringe” feel pain

Tal acknowledges that even a limited impact from rate hikes can mean Canadians “on the fringes” will “feel the pain significantly.”

Mortgage rate analyst Rob McLister told Global News that Canadians who took the plunge earlier this year and jumped on a variable rate mortgage before the Bank of Canada started raising rates in March could have obtain an initial rate of around 1.45%, “not far from the historical low.

If the Bank of Canada meets market expectations by raising rates by three-quarters of a percentage point on Wednesday, that means those mortgage holders would see their rates rise by 300 basis points in seven months.

On an average $300,000 mortgage, that equates to about $500 more in monthly payments, McLister says.

“If you push the limits of your debt ratio, then $500 a month could push you over the edge,” he says.

In fact, more than half (56%) of homeowners worry about their ability to cover monthly mortgage payments, according to a recent survey commissioned by IG Wealth Management.

Some 43% of Canadian mortgage holders surveyed after the last Bank of Canada rate hike in July said they were unsure how they were going to make ends meet, according to the online poll conducted by Pollara Study.

While McLister notes that the federal mortgage stress test introduced in 2018 should mean these Canadians are prepared for higher borrowing costs, if a global supply shock or other economic disruption forces the central bank raise rates after September to control inflation, mortgage rates could rise further.

“Then we talk about a lot more pain, especially for marginal borrowers,” he says.

While Tal’s analysis lays the groundwork for a one-year Bank of Canada interest rate freeze after Wednesday’s likely hike, he also tells Global News there’s “absolutely” a chance that the bank is raising rates due to “external forces” in the ever-changing global economy.

Review your budget as rates rise

Whether you’re feeling the pain of rising rates today or seeing your renewal date looming on the horizon, experts say there are steps you can take now to lessen the impact of interest rates on your budget.

That same IG Wealth Management survey found that while rising mortgage rates are pushing many households to their limits, only two in five respondents said they factor their mortgage into their budget calculations.

“It’s a big piece to leave out. For me in particular, it’s the first thing that comes in the budget, because it’s not something that’s really flexible,” she says.

Riley says Canadians who entered the housing market in recent years were likely used to a low rate environment and could experience “sticker shock” as they approach renewals.

But for Canadians forced to cut spending to keep up with mortgage growth, Riley says there are few easy choices right now.

Although inflation showed signs of a possible peak in July, the cost of living is still well above the Bank of Canada’s 2% target. It’s also not the best time to withdraw money from the market or forgo contributions to registered savings accounts, she argues, because the value of those investments may have fallen in the market downturn. this year and losing compound interest can cost a household dearly in the long run.

A mortgage broker or financial adviser can outline some options for mitigating the impact of rising interest rates, she notes. A longer amortization of your mortgage could reduce monthly payments and variable rate mortgages can be converted to fixed mortgages at any time if the fear of rising rates weighs heavily on your budgets.

The hunting house? Here’s what to ask your mortgage broker before making an offer

As the economy and interest rates continue to evolve, Riley recommends checking your financial assumptions regularly to make sure they hold up over the long term.

“As markets change and things change in your personal circumstances, that’s all the more reason you want to check in with your financial planner regularly, just like you would with your doctor or dentist,” she says. . “It’s not a one-and-done.”

2:20
“Tinder for real estate”: condominiums on the rise in the context of the housing crisis

“Tinder for real estate”: condominiums on the rise in the context of the housing crisis